You are here: Home / Read / Spell Your Name With The Little Blue Truck
(This post contains Amazon affiliate links. Read my full disclosure.)

I was so excited to see that Little Blue Truck by Alice Schertle is the featured book for this week in the Virtual Book Club For Kids. We got this book after my second son was born because even as a young baby he loved farm animals, and it’s still a favorite. This week we are sharing a Little Blue Truck activity to work on name spelling and letter recognition! 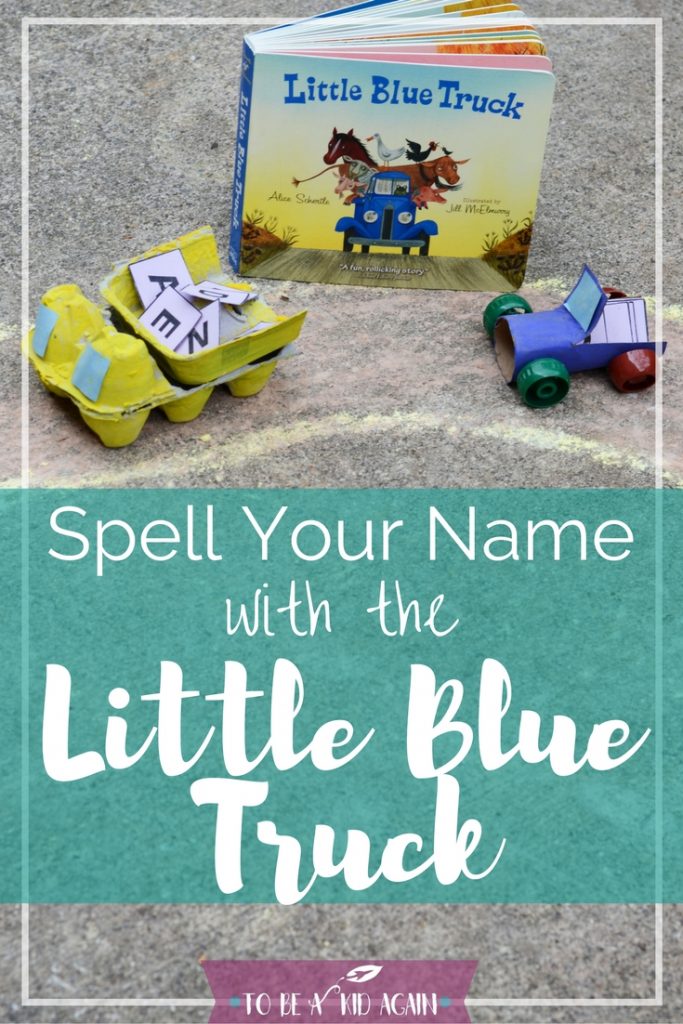 The book for the Virtual Book Club for Kids this week is,  Little Blue Truck, and the theme is Farm!

For this activity, we knew we wanted to make the Little Blue Truck and/or the the Dump Truck from the story. We wanted to keep it simple and use things we could find around the house, so we used recycled materials and basic supplies. We took this activity outside and drove the trucks we made on a road made from chalk, but you could also to this inside with painter’s tape, like this tape road activity from Hands On As We Grow. There’s so many ways to customize this activity to make it work for your family, and it’s a lot of fun! 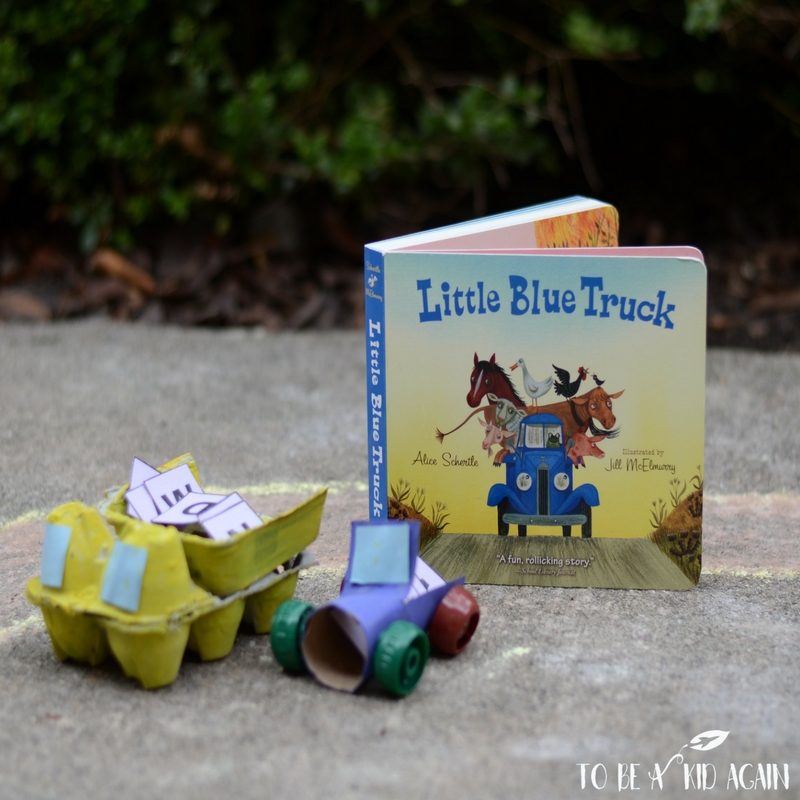 Make one (or both) of the trucks from Little Blue Truck:

We decided to make both because I have two kids at home and we had these supplies on hand. 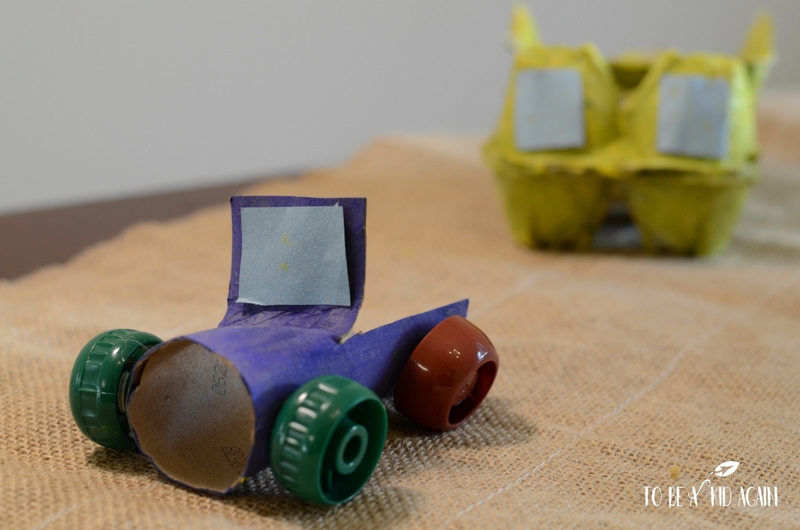 This craft was inspired by the tractor craft from Toddler Things. It’s just so cute and simple! We adapted it to make it look Like the Little Blue Truck. Here’s how we made ours: 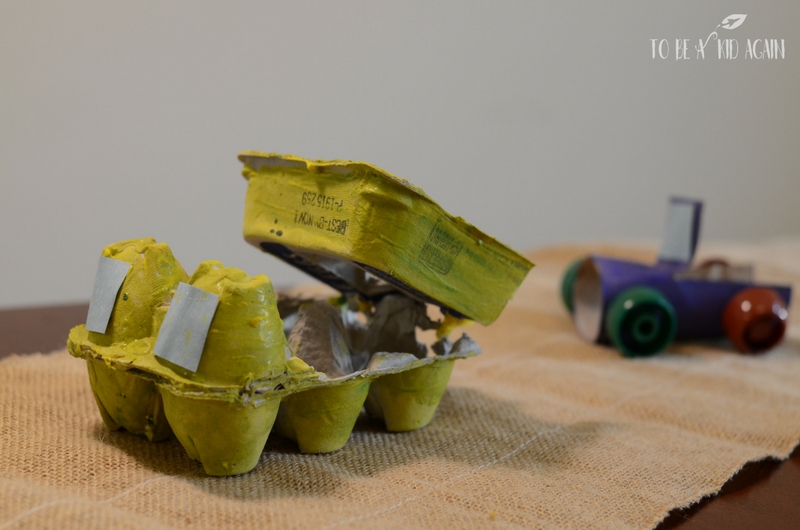 We followed the directions in the DIY Dump Truck post from Rub Some Dirt On It.  You’ll want to head over there for some great detailed instructions on how to make it. We changed it up a little bit to make it look like Dump in the book, Instead of coloring it, we chose to paint it like we did with the Little Blue Truck we made. We also made two smaller rectangle windows using the same paper we used earlier.

Spell Your Name with Help from the Trucks! 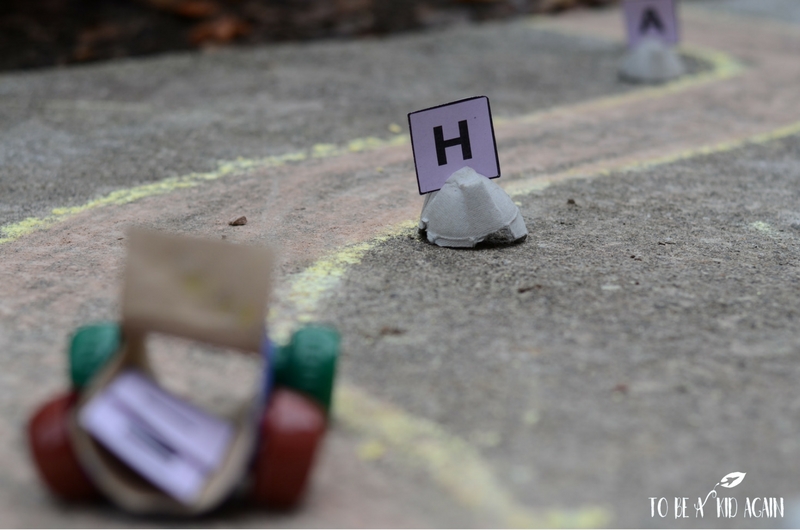 I just made simple roads using chalk. I made it long enough for both of the boys to play and to fit the letters of their names. 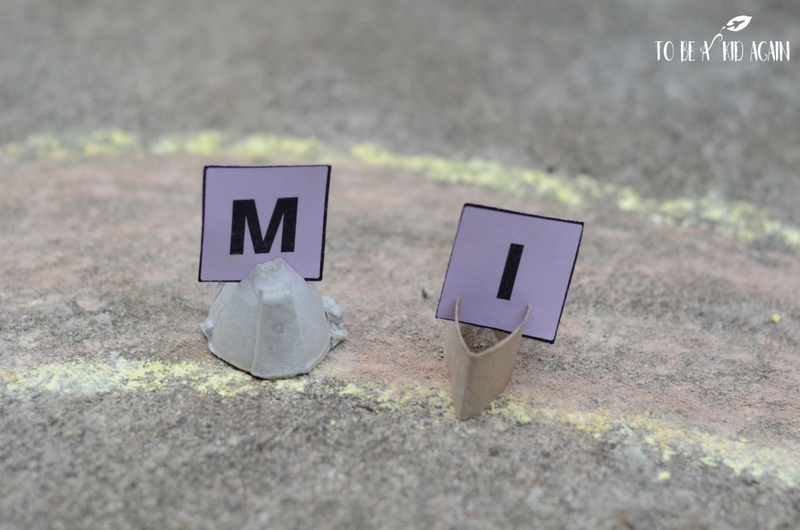 Print the printable, and cut out the letters your child needs to spell their name.  You can also draw your own letter signs on cardstock and cut them out.

After the signs are made, stand them along the road. You may want to start in order for children just beginning to learn how to spell their name (like my toddler). For my preschooler who already knows how to spell his name, I did this out of order so he had to “drive” back and forth along the road to collect his letters. 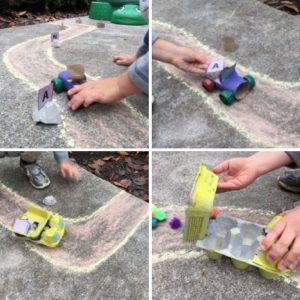 My preschooler played by starting at the beginning of the road, driving along, and stopping at his letters. As he stopped, he took the letter off of the stand and loaded it into his truck. He continued this until he got all of the letters in his name. At the end of the road he laid out is letters in order to spell his name.

With my toddler (who is going on 2), we just went along collecting letters in his name in no particular order, just focusing on letter recognition rather than getting the order correct.

I let them free play with it, which of course ended up with the trucks crashing into the letters and a lot of dumping going on. Typical 🙂

Next time it may be fun to make a “barn” or “farm” to round up the letters to put them in!

Another way to play:

Here we used pom poms. I wrote letters on duct tape, and taped them onto the pom poms so the boys could use them as little “rocks” to play with. These were extra fun with the Dump Truck. 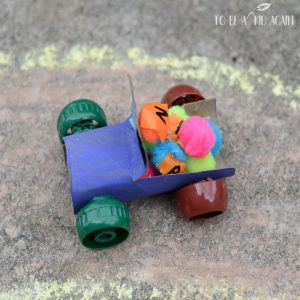 Join in on the fun!

There are so many great activities in the Virtual Book Club For Kids facebook group! We would love for you to join in! 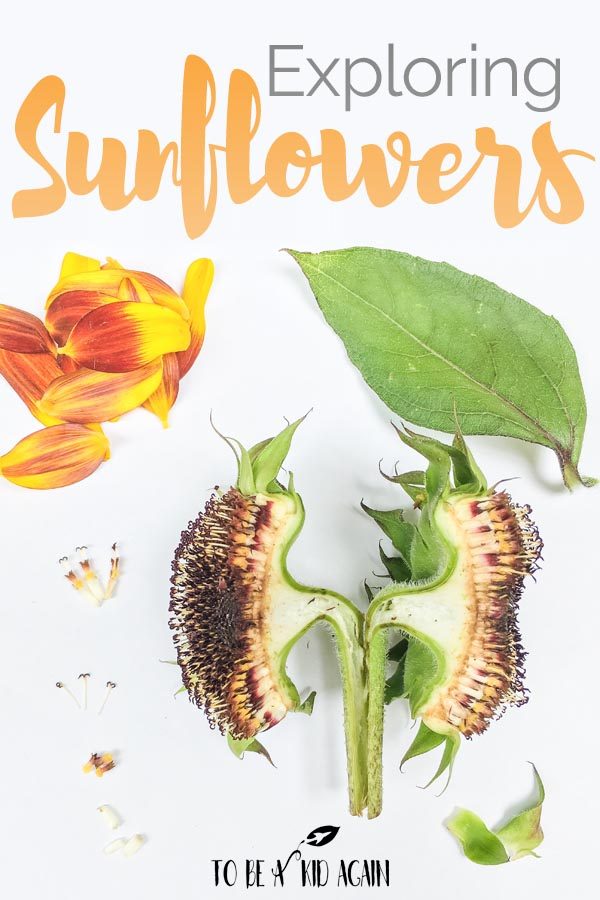 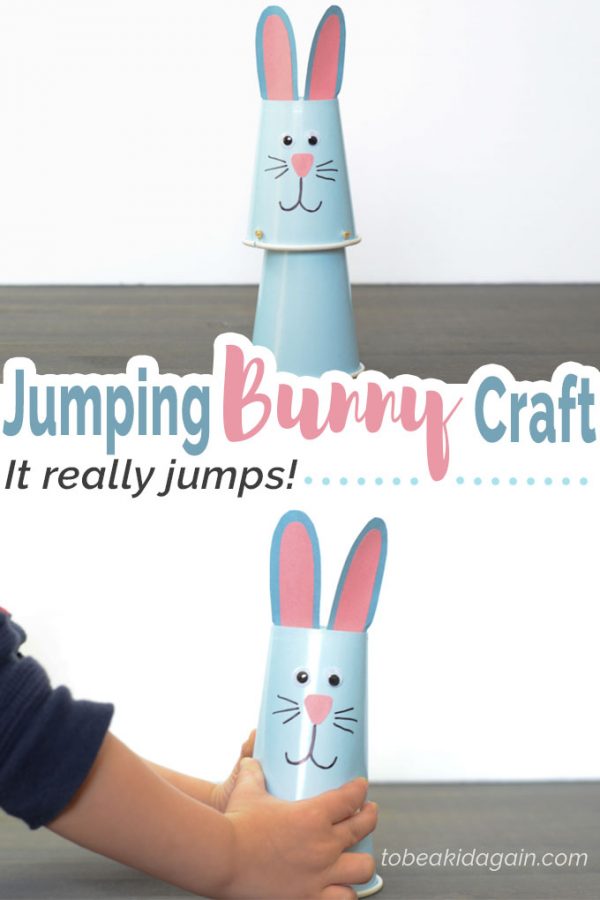 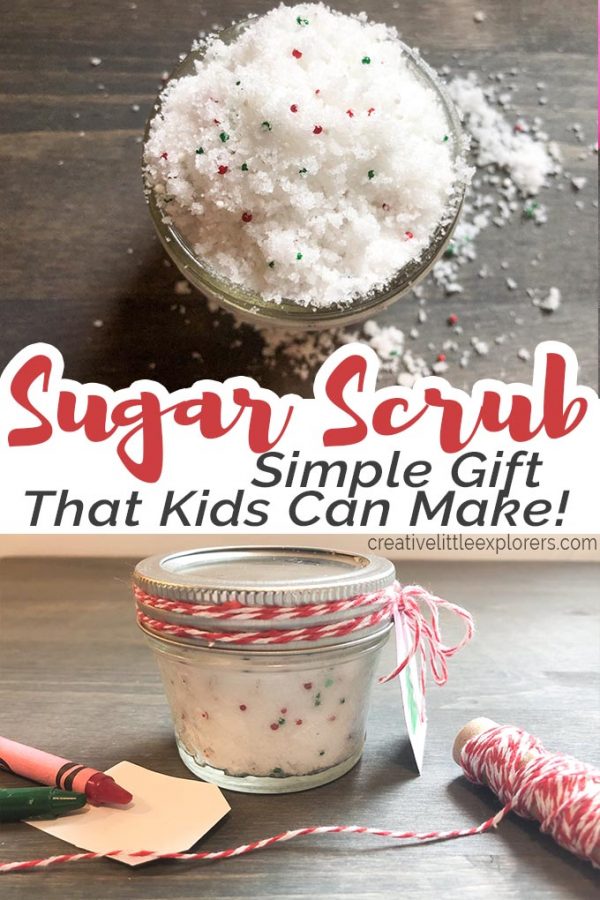 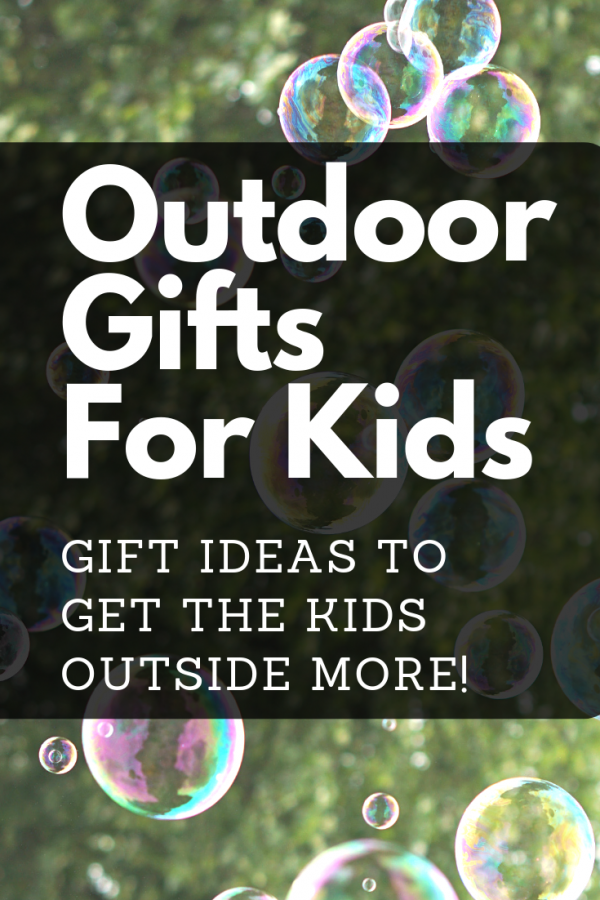